I recently heard something about procrastination that caught my attention so I thought I would share my two cents on the matter. It is only natural to procrastinate. That doesn’t make it okay, but it makes it a little easier to understand and overcome. If you are a master at procrastination lets create a committee and procrastinate together, in all seriousness though, you have a fellow procrastinator right here. For a long time, I thought I put things off because I was lazy or because I was scared. Fear may play into some of it, but it wasn’t until I heard that procrastination is caused by negative feelings that I began to understand it. Fear is a negative emotion, but so is doubt, dread, sadness, discouragement, and embarrassment. We may not be feeling those emotions in the moment, but we know that we don’t want to feel them, so we put things off that may cause them. Like I said, it is only natural, but let’s have a chat about how to combat it, overcome it, or maybe just understand it and acknowledge when we are procrastinating.

Until recently, I thought I didn’t do things because I was afraid of them. I wasn’t afraid of the activity itself; it isn’t like I was wrestling with alligators or eating cockroaches, I was maybe creating a spreadsheet, or starting a new blog post. Activities that didn’t particularly warrant a fight or flight response. What I was afraid of was the outcome of the activity. Would it cause embarrassment? Did I feel as though I wasn’t good enough? Was I worried about failure? What would be the outcome of said potential failure? All of these are negative emotions of things that may happen. If I continued to put things off, I could keep all of those negative possibilities far away from me. What I realized though was that I was also keeping away the positive and fulfilling emotions that could happen and would happen if I just did the work. By keeping those negative possibilities away, I created negativity by not doing what I should do. Procrastination is a pit, the more you wait the harder it is catch up and the more the negative narrative plagues you. There is a lot of “what if” in the air, get it done and the “what if” disappears and all that’s left is “what’s next”. So, what is the first step of getting through the procrastination stage? 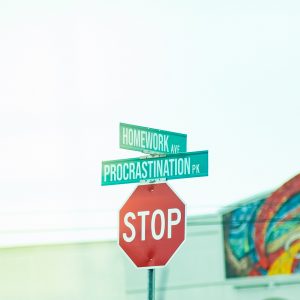 It is hard to handle a task if you don’t even know it is a victim of procrastination. Check out your to-do lists and see what is being drug from one week to the next. If it gets bumped to a third week, it is time to acknowledge that you are procrastinating and there is probably a reason why. In this first step you don’t need to know all the answers you just need to know what activity is not happening. It is now on your radar. Great work! Sometimes acknowledgement is the hardest step. Time to move on to the next.

*Discover the Reason of Procrastination*

Time to dig deep, girlfriend. This may stir up some unexpected emotions so I would suggest that you maybe don’t do this in a public place (or do, it’s like playing with fire). I like to get cozy with a cup of coffee or a hot shower before I dig in. Whatever you need to find a little courage do that. It isn’t easy dealing with our thoughts and emotions. Now that you are feeling cozy it is time to get real with yourself. Take a look at what you are procrastinating and ask yourself why? At first your brain may respond with “shit, I don’t know” that is not an answer, dig deeper. Do you not know how to do the task and feel stupid asking for help? Will your friends think it is a waste of time? Will the outcome be different from what you expect, whether good or bad? Does the task remind you of a time of sadness? Does it make you feel like a you from an earlier time that you don’t want to experience again? Are you already reliving emotions from a you long gone? It could be something as small as you don’t want to talk to Linda in HR because her breath smells, or it could be something more. This is the time to figure that out. Only then can you take on the next step. 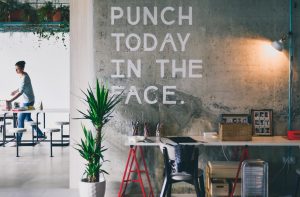 This is a point where most people may say you need to overcome whatever it is you are feeling and break through your procrastination, but there is more to it than that. You don’t need to break through your procrastination, you just simply need to make a decision. You either decide to continue on with the task and get it over with, or you let that task go and stop putting it on your to-do list. Whatever you decide to do you, are no longer procrastinating. The reason I encourage both options is because we are ever changing. From minute to minute we are a different person. Our thoughts and circumstances shape who we are. You may find that you put something on your list in the heat of the moment and then found it really isn’t something you want to do, that works, it doesn’t vibe with you so let that shit go. This isn’t an excuse to never get anything done. If you have a task that you let go and it keeps coming back then it is time to go back to that second step and figure out what is holding you back. If it keeps coming back it is not a heat of the moment task. Let’s say in the decision process you decide to overcome your procrastination, I’m here to tell you that if that is your decision you need to stop procrastinating and get it done. Don’t add it back to the list. It takes one moment of courage to overcome the negativity. If those yucky emotions come creeping back in find another moment of courage. Do this process as many times as you need, what’s important is that you keep doing it.

We all procrastinate, it’s human, but your procrastination does not define you. It doesn’t make you lazy or weak. It makes you a person. And as a person you have decisions to make, just like everybody else. Combating procrastination is just making decisions. Some days those decisions are easier to make than others. If today’s not that day, that’s okay, get some rest and try again tomorrow. Acknowledge your procrastination, discover your negative emotions, and make a decision. It can be difficult, but, my dear, you can do difficult things.